Finchem is a danger to Arizona and this Republic. 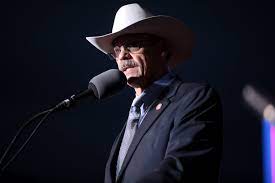 Traitors like Mark Finchem will take away our right to vote, he will end vote by mail, he will overturn election results if he sees fit, and his radical agenda will threaten our economy. Mark Finchem is a member of the Oath Keepers, an extremist hate group who wants to overthrow the government.

The U.S. House committee investigating the Jan. 6, 2021, incursion of the U.S. Capitol issued subpoenas for Finchem, asking for documents and testimony related to his efforts to upend the 2020 election results. Finchem was at the Capitol on January 6th.

If elected, Finchem would, as the official who oversees the state office administering the 2024 presidential election, have the power to possibly affect the outcome of the race. Experts say that scenario could contribute to an even more robust effort to overturn a presidential election. Trump is weighing another bid in 2024.

Finchem, a member of the Arizona Legislature, is among the most outspoken state lawmakers insisting that Trump won the 2020 election. Trump endorsed Finchem last year, saying in a statement that “Mark was willing to say what few others had the courage to say” about the 2020 race.

At a January rally in Florence, Arizona, Finchem, standing alongside the former president, said, “Ladies and gentlemen, we know it and they know it — Donald Trump won.” Trump held another rally with Finchem, as well as other Arizona Republican candidates, in July, where Finchem and others repeated similarly false claims.

Finchem also introduced several resolutions seeking to decertify the results of the 2020 election in three major Arizona counties, as well as a bill that would give the Legislature the power to reject election results.

He supported a partisan review of Maricopa County’s election results, even though the review reaffirmed Biden’s victory.

Finchem has called for stock piling weapons in preparation for a civil war.